Funded by a five-year $750,000 grant from the Andrew W. Mellon Foundation, New College: Connecting the Arts and Humanities on Florida’s Creative Coast seeks to foster deeper understanding of the arts and humanities through new programs at New College and with local arts organizations and the Cross College Alliance. Through the expansion of existing public programs and a new series of open seminars, the local community is invited to hear from — and speak with — faculty scholars and artists who are renowned in their fields.

In close consultation with our colleagues at New College along with recommendations from local health officials and the State of Florida, some of our Arts + Humanities events will be cancelled or postponed in the coming weeks. As we monitor developments around COVID-19, the difficult decision to cancel or reschedule events is being made on a case-by-case basis. Please check back here periodically for updates to these events.

The Colette Project Sarasota: A Series of Events

Date, Times, and Locations on the Official Colette Series Webpage

The Colette Project Sarasota is presented by: New College of Florida, Alliance Française de Sarasota, Selby Public Library, Ringling College of Art and Design, Florida Studio Theatre, Marie Selby Botanical Gardens, and C’est la Vie restaurant (University Park). Provocative and prolific, the French writer Colette (1873-1954) was a novelist, journalist, and actress, a liberated woman in a changing France. On the centennial of her 1920 novel Chéri, join us for a community-wide celebration of Colette’s love of literature and music, cats and dogs, food and flowers. This series spans February–March 2020.

New College faculty and Ringling Museum’s Circus Collection curator collaborate and share the experiences of New College students exploring some aspects of the archives housed at the museum next door.

The Ringling’s Tibbals Collection houses material related to circus history and performance. Students in the co-taught course “Bodies and Minds” have been collaborating on creating digital collections based on images of extraordinarily bodied performers and exploring questions about embodied ways of knowing the world. The real challenge is thinking how we look, how performance works, how these performers are presenting themselves, and how we might frame images of these performers when they are no longer present to speak for themselves in person.

This 2012 film, directed by Mira Nair, is based on the 2007 novel by Mohsin Hamid. The Reluctant Fundamentalist follows Changez Khan, a middle-class Pakistani from Lahore chasing his dream of success in a prestigious Wall Street valuation firm. Favored by his boss, his future is looking to be on his planned upward trajectory but whilst on company business in the Philippines, he watches news footage of the twin towers falling and suddenly his future takes an entirely different path. In this political thriller Changez Khan finds himself embroiled in a conflict between his American Dream, a hostage crisis, and the enduring call of his family’s homeland. The Reluctant Fundamentalist has been recognized globally, accruing a number of awards and in 2013 Nair was awarded The Bridge, the German Film Award for Peace, which recognizes film artists whose work builds bridges and inspires tolerance and humanitarianism.

Jessica K. Young is an Assistant Professor of Global English at New College of Florida. She holds Ph.D. from the University of Illinois at Urbana-Champaign in English with a concentration in Holocaust, Genocide, and Memory Studies. Her research focuses on representations of trauma and memory transmission in contemporary South Asian literature and she has taught courses on Postcolonial Studies, World Literature, Graphic Novels, as well as British and American Fiction. She co-edited Days and Memory, the blog of the Initiative in Holocaust, Genocide, and Memory Studies with Michael Rothberg. She is a citizen of the Seneca-Cayuga Nation of Oklahoma.

Join Visiting Assistant Professor of Creative Writing Dr. Emily Carr and Writer-in-Residence Dr. Angela Buck as they read stories and poems featuring talking animals; discuss the intersection of genre fiction and avant garde aesthetics; and talk about using the fantastical to send humanity off the rails, in a good way.

Free and open to the public. I Scream Social is designed to empower student writers, encourage poetry culture, and channel our timely anger into meaningful literary performances.

UPDATE: Our April 2 Artist Conversation and April 4 concert will not be presented in front of a public audience, but we are working at this time to live-stream video of the concert at some point in the future. When we know details, they will be posted here and on our Facebook page. 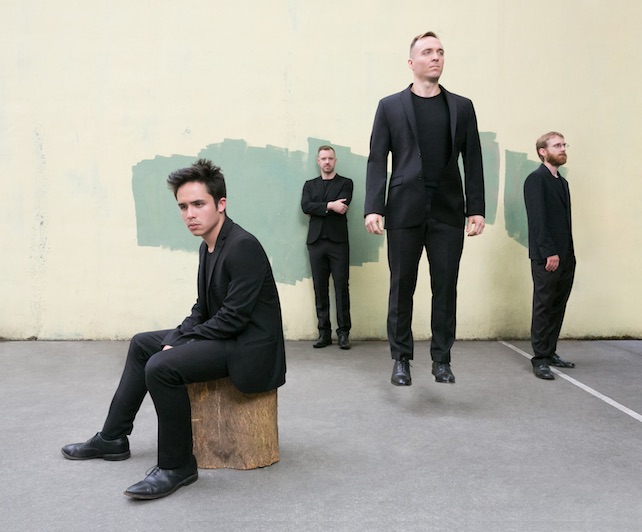 Before attending JACK Quartet’s Concert, come to a special conversation event with the artists who make up one of the world’s premiere new music ensembles. This open platform will allow you to converse with the artists to better understand their process and the development of their current works.

Artist Conversation Series: Realizing that our concerts include music that will be new to most or all of the audience, we strive to offer plenty of context. These events generally begin these with a brief performance—an excerpt from something that will be in the concert—and then start a discussion with everyone there about their responses to what they just heard and saw. More Info

Words in Action showcases the way writers and other artists find careers in which to apply their skills, and the ways art lovers bring the arts into their lives. Professionals share how their careers and their love of the literary and other arts intersect.

We’ll begin with the idea that all writing is an experiment, and it’s possible to write amazingly surprising work by making up rules and following them.

Spaces are limited, so save your spot here.

UPDATE: Our April 2 Artist Conversation and April 4 concert will not be presented in front of a public audience, but we are working at this time to live-stream video of the concert at some point in the future. When we know details, they will be posted here and on our Facebook page.

Long recognized as one of the world’s premiere new music ensembles, JACK Quartet was named Musical America’s 2018 “Ensemble of the Year,” and in 2019 received a prestigious Avery Fisher Career Grant. JACK made its NMNC debut in 2008, and has become a favorite through subsequent appearances, which have included a performance of music composed by New College alums and an unforgettable performance of Georg Friedrich Haas’s String Quartet No. 3, performed in total darkness in the Black Box Theater. For the finale of our 2019–20 season, JACK will perform John Zorn’s absorbing The Alchemist, together with works by other contemporary composers.

Comprising violinists Christopher Otto and Austin Wulliman, violist John Pickford Richards, and cellist Jay Campbell, JACKquartet operates as a nonprofit organization dedicated to the performance, commissioning, and appreciation of new string quartet music. Through intimate relationships with today’s most creative voices, JACK embraces close collaboration with the composers they perform, leading to a radical embodiment of the technical, musical, and emotional aspects of their work.

Join Professor Mike Michalson as he reflects on his almost three years as a professor of religion at New College of Florida.

Professor Michalson specializes in religious thought in the West from the Enlightenment to the present. He previously served as the College’s president, following fifteen years on the faculty at Oberlin College. Among his publications are four books on such thinkers as Immanuel Kant, G.E. Lessing, and Søren Kierkegaard. He was the American consulting editor of the recently published Blackwell Encyclopedia of Modern Christian Thought.

This is a 1976 epic historical drama film directed and produced by Moustapha Akkad, chronicling the life and times of the Islamic prophet Muhammad through the perspective of his uncle Hamza ibn Abdul-Muttalib and companion Zayd ibn Harithah. It serves as an introduction to early Islamic history. The international ensemble cast includes Anthony Quinn, Irene Papas, Michael Ansara, Johnny Sekka, Michael Forest, André Morell, Garrick Hagon, Damien Thomas, and Martin Benson. It was an international co-production between Lebanon, Kuwait, Libya, Morocco, Saudi Arabia, and the United Kingdom. The film was nominated for Best Original Score in the 50th Academy Awards, composed by Maurice Jarre, but lost the award to Star Wars (composed by John Williams).

Following the screening there will be a Q&A with Dr. Nassima Neggaz.

More information on the launch of the digital exhibit coming soon.

The New College Art Department is pleased to present the Annual Thesis Art Exhibition. A culmination of a year long studio art research project, the artwork in this exhibition reflects a diverse range of themes and topics.

More information on the streaming will be forthcoming in the next week.

This year’s annual Parkinson Awareness Event will present the popular Dance for Parkinson class led by Leymis Bolaños Wilmott with live accompaniment and assistance by Sarasota Contemporary Dance (SCD) members. The event will be part of a multi-generational National Water Dance performance including participants from: Parkinson Place, New College of Florida, and SCD’s studio classes. This year’s event is A Celebration of Arts in Action. National Water Dance is an artist-driven collective of dancers and educators confronting critical water issues facing the United States. Stretching from New York to Hawaii and from Alaska to Puerto Rico we create simultaneous, site-specific dance performances with movers of all ages and experience.

Hosted by: John and Mable Ringling Museum and New College of Florida, in collaboration with the University of Winchester, UK ‘Vari(a)bilities V” will include a public lecture by Dr. Rosemarie Garland-Thomson on bioethics, disability, and the rest of us. Dance performances and a themed exhibition at the Ringling Circus Museum.

New Music New College (NMNC) is an extension of the music program at New College that presents five programs of contemporary, avant-garde and experimental music each year.

[performance @ new college] is a collegiate theatrical production company under the artistic direction of the faculty in theatre and performance studies. The primary purpose of our production company is to provide practicum opportunities for students in the joint disciplinary Theatre AOC and to invite students from across the campus to engage with the performing arts.

A list of past events brought to you by “New College: Connecting the Arts and Humanities on Florida’s Creative Coast.”